Jeremy Lepisto at the National College of Art and Design


The Glass Society of Ireland was delighted to attend Jeremy Lepisto’s talk at the National College of Art and Design on Tuesday. He is very open about his work both conceptually and technically which made for a fascinating talk. 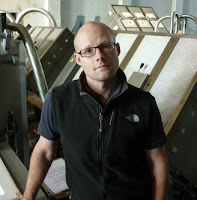 Lepisto grew up in the glass capital of America, Toledo, Ohio. This industrial setting has made a huge impact on his aesthetic. Looking at his body of work you can see hard architectural lines as well as iconic structure such as his water towers. These visual influences are only one part of the narrative which resonates from his childhood into his present day life.

The work ethic in the family was strong and Lepisto himself worked from an early age. He spoke fondly of his family and specially his Grandfather ‘Pops’. Lepisto tells of how his Grandfather took great pride in his work and believed “a firm foundation is the key to a successful structure”. This sentiment has left its mark and this can be seen not only in the care and quality of the art works Lepisto produces, but also in the images he showed of his immaculate workspaces.

Lepisto describes his work as self portraits, each one reflecting his current situation and how it relates to his present environment. In doing this he creates a body of work which encompasses both the banality and the complexity of life simultaneously.
This work, inspired by a sense of place and strong relationship with the visual experiences available in the United States, came up against a challenge when Lepisto and his wife made the decision to move to Australia. Away from his support network and the landscapes which appear as such an integral part of his early work Lepisto had to tackle his art from new angles. 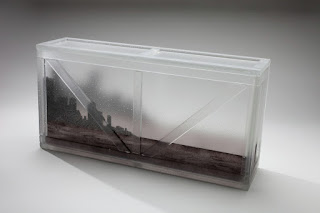 The most recent series, the container series, looks at transition and how life in one location can be packaged and moved another location. The lack of imagery in this series stems from a concern about appropriation of Australian vernacular architecture. This landscape, not yet ingrained in Lepisto sense of self, perhaps in time will begin to creep into new work. The auto biographical element in the work is strong and Lepisto is very open about the events which inspired the works.

In an earlier series building blocks the pieces can be moved to form double meanings. In one position the images build from the edges into a cityscape, arranged in their second configuration to buildings start at the edges of the work and fade into a blank space in the centre. Lepisto explained how this series was made in a period where he and his wife where living in different locations. He drew our attention to the position of two small post boxes in the imagery and the piece changed from a clever puzzle to an eloquent expression of the pain of being apart and the joys of being reunited.

Lepisto’s practice is visually very beautiful and would be pleasing as studies of environment alone. However, it is the ability to produce subtle meanings in the works which push them to a new level of significance.

The Glass Society of Ireland blog is managed by Meadhbh McIlgorm (Media and Communications Officer for GSoI) using Blogger. If you have any queries or issues, please contact us here:

The Glass Society of Ireland blog is a news source for makers, historians, students and enthusiasts. If you would like to have a feature in the blog please contact glasssocietyofireland@gmail.com.
How to join:
If you are interested in joining the Glass Society of Ireland and receiving our monthly news letters please email glasssocietyofireland@gmail.com with 'NEW MEMBER REQUEST' in the subject line of your email.